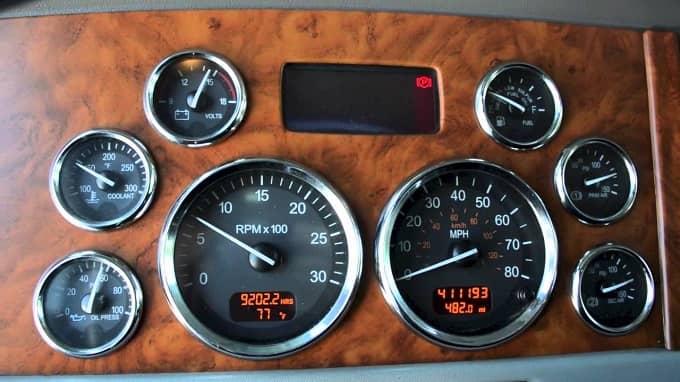 As an Amazon Associate I earn from qualifying purchases at no additional cost to you. But if you buy from any of the links below, it will help me run this blog smoothly.

You are running your Peterbilt 386 on the highway and you realize that the dash lights are not working. No need to panic as a trucker. But sometimes the dash light not working can be resolved by either resetting the dashboard or by replacing a broken fuse.

If you spot no other problem of the engine or something else and only dash light is a problem. It would probably be due to any electrical problem in the Peterbilt 386 that is usually in the fuse box.

Why Peterbilt 386 Dash Lights Not Working?

If that’s the case, then it might not be a major issue at all. Sometimes a blown fuse within the circuit can make the dash light go off.

First of all you need to locate the fuse box of Peterbilt 386 truck. The fuse box for dash circuit is inside the front cab of the truck on driver side. So one of the 5 things can happen if the dash lights are not working on your peterbilt 386.

So now you need to figure out why your dash lights are not working and which fix you would need to apply to turn them on as usual.

Even if you have no prior knowledge to car electronics, you can still know if a fuse is blown or not. A blown fuse would seem like a burnt one or with the broken connection. If the fuse has recently blown, you can even smell it.

Also another common issue that might cause the dash lights to go off in Peterbilt 386 is the glitch in dashboard program. So before getting any significant replacement, try resetting the dashboard and see if it works.

Because the glitch in dashboard system might not be giving the dash lights any power resulting in no dash light.

To reset the dashboard on your Peterbilt 386 you need to get in the truck and keep the doors and brakes off. Turn the ignition key on and let it cycle to 30 seconds. Then turn off the key. Repeat it for 3 times and you will see that the dashboard has been reset.

And if no fuse has been blown, your dash lights would instantly get turned on as soon you ignite the engine.

Where is the fuse for my dashboard?

The fuse box on any Peterbilt truck can usually be found in front of cab either on driver’s or passenger side. Depending on the truck model you are using.

How to tell if a Fuse is Blown?

If the fuse is blown, it could either be burnt out or you might see no end to end connection when you see it clearly. That’s a clear indication that the fuse is blown. However you can smell a burned one too.

What causes dash lights to not work?

Well there are various reasons for dash lights to not work on Peterbilt 386. But the most common are a blown fuse in dashboard circuit or a glitch in dashboard system. Replacing the blown out fuse and resetting the dashboard system usually fixes the issue.

Amazon and the Amazon logo are trademarks of Amazon.com, Inc, or its affiliates.